Instructive meeting with students of Faculty of Law and Political Science 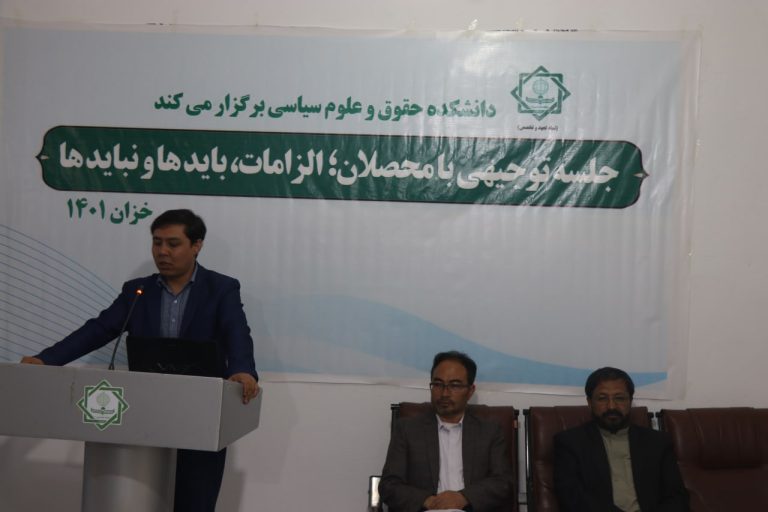 Faculty of Law and Political Science held an instructive meeting with students to identify them requirements, must-to-do notes in the university on Monday September 12, 2022 in both morning and afternoon periods. The meeting was held with the presence of honorable dean of university Mr. Habibi, the Head of law and political science faculty, the directorate of law and political science, some lecturers of the department. The warm presence of the students in large number, especially in the morning period was really unique and encouraging.

The implementation of this program was carried out by Mr. Anwari, one of the university’s student and the session began with recitation of Holy Quran by Qari Ahmad Asef;

Then, dean of the university, Mr. Habibi, mad a speech, emphasizing on the importance of science and education, he emphasized on its unique importance and said that the difficulties of learning period are temporary and fleeting, but neglecting education will lead to eternal regret.

In another part of his speech, he invited the students to make more efforts to learn and added that today the standard of literacy has changed according to UNESCO and the students should adapt themselves to the new standards. He emphasized that Khatam-ul-Nabiyin University will afford its best services for students by providing quality-based services and students should benefit most exploiting such opportunities. Assigning an instructor and consultant teacher each class in order to set a better communicate between the students and lecturers and the university, was another priority that was mentioned by the Dean.

The directorate of Law Department, Mr. Marafet, was one of the speakers of the program, while explaining about the disciplinary laws of the university, said to the students: “Discipline is very important in human life in all matters. Discipline is recommended according to religious basis as well as in sociology, anthropology and ontology. If we remove the discipline from the universe order, all cosmos will vanish. If there is no discipline in human society, society will lose its human nature. Likewise, if we remove discipline from individual human life, no one will achieve the lofty goals and human perfections”. He added: “Observing the discipline and order in all matters of personal and social life, especially in academic life, is considered more necessary for law students whose philosophy of education and field of study is to ensure social order and establish justice in society”.

The third speaker of program was Mr. Karimi, the head of law and political science faculty, who addressed about the issue of the credit system and explained this system to the students according to the latest reforms implemented by the Ministry of Education. Considering the presence of new admitted students, besides pointing out the benefits and features of the credit system, he discussed its regulations in detail.