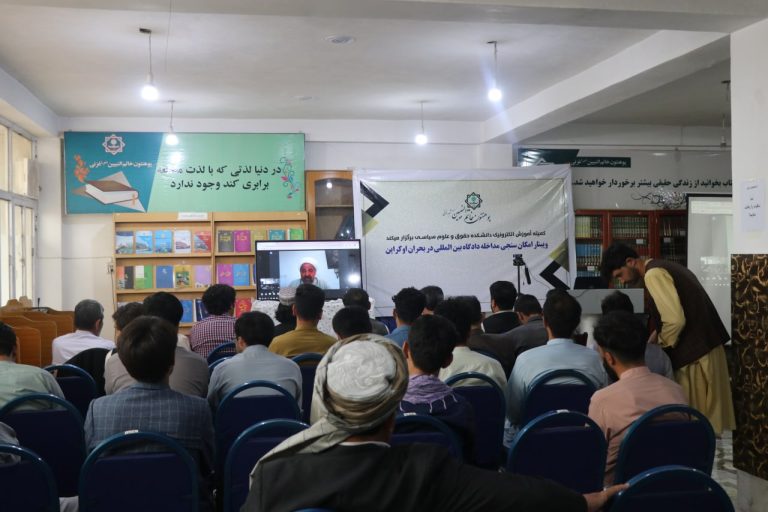 On Tuesday evening, 5th July 2022, “The feasibility of international court intervention in Ukraine crisis” was discussed in conference hall of Khatam-ul-Nabiin University, Ghazni branch. In this conference, Professor Shams (Ph. D. in … his qualifications should be completed), shared his scientific analyzes and evaluations on the problem with the lecturers and students of University, through a webinar.

Professor Shams, while expressing his happiness for attending this webinar and thanking from the Dean of University, Mr. Habibi and his colleagues, pointed out the historical background and reasons for the formation of this court and shortags of previous and similar courts. He continued discussing about the authority of International Court of Justice for the crimes of genocide, crimes against humanity, war crimes and aggression against the territory of another country. He added that this court has the power to intervene in this type of issues if one of the member states of this court requests intervention, or the United Nations Security Council refers a case to this court, or if the prosecutor, according to the evidence that has, wants to intervene; but this case has its own conditions. Article 15, first sub-section of court statute has stated these conditions as: The court has the right to exercise jurisdiction to those governments that have accepted the membership of the court and the Security Council has verified and confirmed the aggression.

After explaining the scientific and theoretical basics of the problem, he considered the case of Ukraine as a clear aggression, as the attack took place by land, air and sea, and as evidences show, most of the examples of crimes has happened there. But regarding the intervention of the international court, this is not possible; Because none of the countries of Russia and Ukraine are members of this court. On the other hand, the Security Council does not have such authority, because of the right of veto that Russia has. This right makes the efforts of the Security Council useless. As long as United Nations has this structure, removing Russia from the Security Council is not possible. As a result, the possibility of international court intervention in this case is ruled out.

At the end of program, students asked some questions and Professor Shams answered them; Habibi dean of the university also thanked from professor Shams for his company in this program and worthwhile analysis he provided.

PrevقبلیFinal match of student futsal tournament of Khatam Al Nabieen University, Ghazni branch
بعدیScientific seminar “The dis-resistance of private banks in Afghanistan against the crisis of 2022; factors and contexts”Next